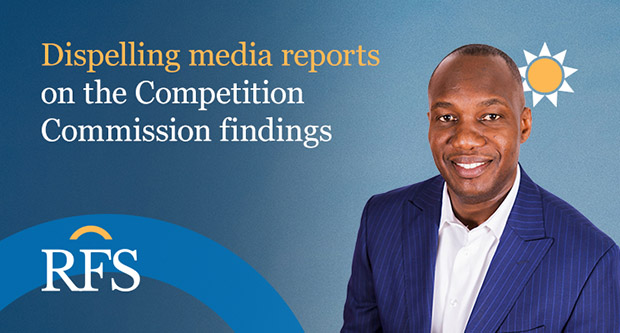 The Namibian Competition Commission (NACC) completed an investigation which it started in 2017 (not early this year, as reported) against RFS Fund Administrators (RFS) and other pension fund administrators. The NACC investigated “alleged abuse of administrators of their dominant position by tying and bundling (also known as cross-selling and conditional selling) distinct and separate products using exclusive service level agreements with their clients, in particular the umbrella funds”. RFS along with other competitors was alleged to have “tied and bundled together administration services with services that are non-administration in nature such as actuarial services, consulting services, legal services, insurance, and investment management”.

The Commission informed RFS that their investigation did not find RFS and others to have contravened the relevant section of the Competition Act as alleged and thus absolved RFS. NACC’s findings enjoyed a lot of media attention with various misplaced and misleading statements being made without appropriate context. What is most disappointing to note is that none of the media houses contacted RFS as a party referred to in the investigation to solicit comments and instead relied on non-industry players to comment on misleading economic terms that were thrown around. 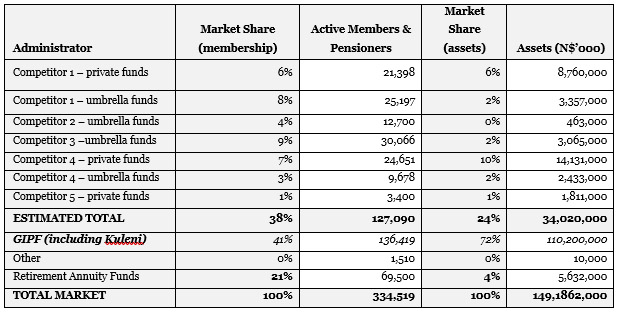 Competitor statistics as at July 2018 (when the investigation was underway):

As can clearly be seen from above statistics, five administrators serving the private funds industry, were accused of anti-competitive practices, although these five represented 38% of the overall membership of the pension fund market and only 24% of the overall pension fund assets. It is interesting that these five players, representing a mere 38% of the total market, should be accused of being monopolistic? A quick reference check to South African pension fund market, which is similar in many respects to Namibia, revealed the following: South African Financial Services Board (counterpart of NAMFISA) 2018 report, indicated that the number of pension funds registered were 5144, with a total membership (active members and pensioners) of 16.6 million members. There were 170 registered pension fund administrators at the time, which produces a ratio of 98 000 members per administrator.

I have already dispelled the first statement with reference to the table above. It is factually not correct. On the second and third statement it was shown over the years that our pension funds’ market is too small to carry more than three administrators. Whenever more than three were active one or more closed doors for not being economically viable. While competition in the market will ensure that no single competitor can charge significantly higher costs than the others, too many players competing for unviable shares of the market will lead to all having to increase their costs beyond reasonable levels to survive.

With the last statement the NACC is generalising. While it may apply to some administrators, it does not apply to all. Per Google search, “vertical integration” is a business strategy in which a company controls multiple stages of its production process and supply chain. RFS, is the administrator of both private/stand-alone employer pension fund arrangements and founder of an umbrella fund, the Benchmark Retirement Fund. All our funds make use of different and unrelated non-administration service providers, such as actuaries, consultants, insurers, auditors, and investment managers. RFS thus only performs fund administration services and nothing else. The FIMA will also now require fund administrators to be registered and regulated by NAMFISA as pre-empted by NACC.

We have jealously guarded our independence and believe this is what helped RFS to be one of the few viable fund administrators, with at least 25 000 members under our administration.

Important notice and disclaimer
This article summarises the understanding, observation and notes of the author and lays no claim on accuracy, correctness or completeness. RFS (Pty) Ltd does not accept any liability for the content of this contribution and no decision should be taken on the basis of the information contained herein before having confirmed the detail with the relevant party. Any views expressed herein are those of the author and not necessarily those of RFS.

PENSION CALCULATOR
How much will you need when you retire and are you investing enough?
GALLERY
CLIENT COM(PLI)MENTS
FREE INVESTMENT AND PENSION FUND NEWS
Subscribe now to receive our monthly newsletter.
SUBSCRIBEUNSUBSCRIBE
We use cookies to make this site simpler. By using this site, you permit the use of cookies.
More information Ok